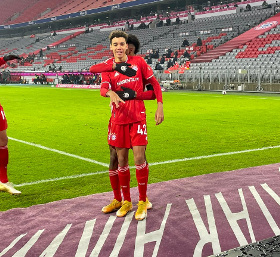 Chelsea academy product of Nigerian descent Jamal Musiala continues to push for a starting role at German champions Bayern Munich following his impressive performances off the bench, allnigeriasoccer.com reports.
The tri-eligible attacking midfielder shone as Bayern Munich and RB Leipzig shared the spoils in a six-goal thriller at the Allianz Arena on Saturday evening.
Initially named on the bench, Musiala was introduced in the 25th minute as a replacement for the injured Javi Martinez and it was an inspired substitution from manager Hans-Dieter Flick as the 17-year-old scored to make it 1-1 five minutes after coming off the bench.
The England U21 international smashed the ball home from outside the box after he was teed up by Kingsley Coman.
One of the most promising teenagers in the world at the moment, Musiala has been consistent when given game time and his goal on the half-hour mark today took his tally to three league goals after less than 150 minutes of action as a substitute.
According to the official website of the Bundesliga, Musiala is only the fourth 17-year-old to reach at least three Bundesliga goals, after Christian Pulisic, Timo Werner and Kai Havertz who are now on the books of Chelsea after starring in the German top-flight.
This week, he made his first start in the UEFA Champions League in a 1-1 draw with Atlético Madrid.
Ifeanyi Emmanuel
Photo Credit : fcbayern.com
Copyright ANS