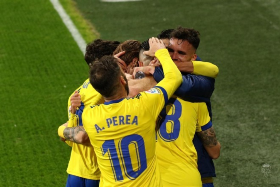 Nigerian-born winger Bobby Adekanye helped Cadiz to pull off a shock 2-1 win against Barcelona at the Estadio Ramón de Carranza on Saturday night.
Alvaro Giménez gave the home team an early lead in the eighth minute, setting a difficult precedent for the rest of the match.
Barcelona equalised twelve minutes into the second half when Cadiz defender Pedro Alcala put the ball into his own net and the team coached by legendary former player Ronald Koeman thought they had more than half an hour to find a winner.
Alvaro Negredo profited from a defensive error by goalkeeper Marc-Andre ter Stegen to score what eventually proved to be winning goal in the 63rd minute, a minute after he came off the bench.
Adekanye was one of three substitutions made by Cadiz manager in the 80th minute and the La Masia product was lively after coming on.
The 21-year-old was at Barcelona for three years, from 2011 to 2014, before transferring to PSV, followed by spells at Liverpool and Lazio.
In the 87th minute, Adekanye had a chance to kill the game when he was released and through on goal but agonizingly saw his shot narrowly miss the target.
He made his La Liga debut off the bench against Elche last weekend.
Ifeanyi Emmanuel
Photo Credit : cadizcf.com
Copyright ANS