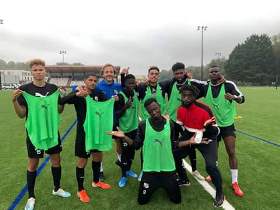 1980 Africa Cup of Nations-winning midfielder, Henry Nwosu MON, is expected to arrive Jos, the Plateau State capital on 8th December ahead of the screening of young footballers expected to be admitted into the Africa Athletes Academy soccer programmes.
The Chief Executive Officer of the Academy, Edwin Ademola Ademola, told journalists in Jos, that the screening exercise is expected to take centre stage at Saint John's College in Jos on Wednesday.

He further said talented young lads will be picked at the end of the screening exercise and thereafter be put in a compulsory boarding programme at Saint John's College in Jos.

The compulsory boarding programme is expected to be for boys at Under-13, Under-15 and Under-17 levels while those between the ages of 18 and 20 will be expected to partake in non-boarding sessions.

Mr Ademola added that the owners of Africa Athletes Academy simply want to reshape the standard of football within Nigeria and aid young lads to attain their dreams locally and Internationally as the body already operates within best International standards for academies.

The end-result of the programme is to ultimately help young footballers pursue their academics and their sporting dreams simultaneously without hindrance.