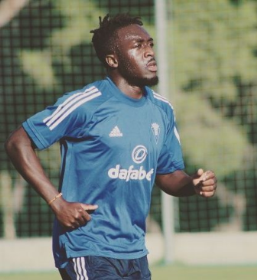 La Liga side Cadiz CF are sweating over the fitness of former Liverpool starlet Bobby Adekanye before their trip to Galicia where they face Celta de Vigo in the next round of matches in the Spanish top-flight.
For the first time in his career, Adekanye was on the same pitch as one of his idols in Lionel Messi after coming off the bench in the 80th minute to help Cadiz record a shock 2-1 win over Barcelona at the Estadio Ramón de Carranza last weekend.
As a result of the minutes he enjoyed against his former club, the Nigeria-born winger suffered a muscular injury.
Adekanye has undergone tests to determine the severity of his injury and the timeline for his return to action.
Providing a medical update on the squad, club doctor Sebastián Jiménez said to Cadiz's official website:"Marcos Mauro has suffered a grade I-II ankle sprain, with the timeline on his recovery dependent on how the injury progresses.

"Alcalá has a nasal bone fracture; he will have to wear protective gear, but the issue will not prevent him from training as normal.

"Finally, Adekanye has suffered a hamstring tear in his left thigh."
Adekanye's other appearance in La Liga since his loan move from Lazio in the summer transfer window was against Elche CF on November 28.
Igho Kingsley
Copyright ANS