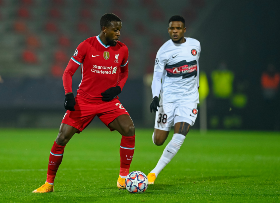 Chairman of FC Midtjylland, Rasmus Ankersen has revealed that the Danish champions are in talks with Frank Onyeka over his future at the club.
The FC Ebedei product was on the radar of European clubs in the summer transfer window but a deal did not happen because the Wolves were competing in the Champions League.
Despite Midtjylland unable to make it to the last sixteen, Onyeka and Alexander Scholz were one of the standout players for the Superliga side, with the Nigerian showing off his tackling abilities in the middle of the field.
Commenting on the future of Onyeka and Schilz, Ankersen told BT : "As a club, we also have a very strong connection to both of the two players, and they have given us a lot.
"Personally, I also hope to see them be part of FC Midtjylland in the future, and then time will tell whether they must first have a trip abroad and then maybe come back again, or whether it will be with a contract extension.
"It is something we have a close dialogue with both players around".
Onyeka is under contract with FC Midtjylland until 2024.
Igho Kingsley
Photo Credit : liverpoolfc.com
Copyright ANS