Subscribe
Germany Ahead Of Nigeria In Race For Bayern Munich Center Back Taller Than Per Mertesacker
Published: December 14, 2020 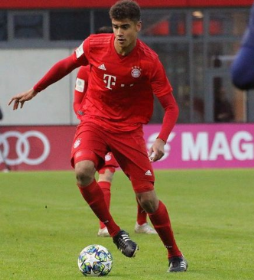 Allnigeriasoccer.com understands that the German Football Association are ahead of their Nigerian counterparts in the race for the services of Bayern Munich central defender Jamie Lawrence.
Standing at 6ft 7in, Lawrence has an imposing height for his age and is taller than former Arsenal star Per Mertesacker (6ft 6in).
The 18-year-old joined Bayern Munich in 2017 after he was scouted while playing for Kirchheimer SC U15s, a club based in the eastern district of Munich.
The German Football Association have identified Lawrence as one for the future and he earned his first cap for their youth team when he started against Spain at the 2019 U17 Algarve Tournament.
If the defender continues to impress for Bayern Munich II in the 3 Liga, then he is set to follow in the footsteps of two players of Nigerian descent in Jamal Musiala and Joshua Zirkzee who shone for the reserve team before gaining promotion to the first team.
With his height, he wins many aerial duels and is a threat in the opponents' 18-yard box when it comes to set pieces.
Last season, while playing for Bayern Munich U19s, Lawrence scored two goals via headers and the previous season, scored a headed goal for the U17s in the B-Junioren Bundesliga Sud/Sudwest.
The Munich-born Lawrence is set to be a key player for Bayern Munich in this season's UEFA Youth League.
Ifeanyi Emmanuel
Photo Credit : Instagram.com/_jamielawrence_
Copyright ANS