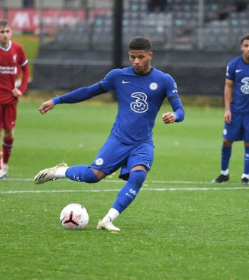 Chelsea warded off competition from Manchester United to sign Norwegian-Nigerian wonderkid Bryan Fiabema in the January transfer window, the striker's father, Mina Fiabema has exclusively informed allnigeriasoccer.com.
Fiabema had attracted concrete interest from both United and Chelsea as well as SPAL in Italy but it was the Blues that stole a march on their rivals by pulling off the signing in the January transfer window rather than waiting for the summer.
It has been suggested that Manchester United were in the driving seat for the signature of the promising striker before Chelsea came calling.
"Chelsea for him was a dream come true, Manchester United were also looking at him," Mina Fiabema told allnigeriasoccer.com.

"Chelsea were faster than Manchester United. Youth players are hardly signed during the winter transfer window, so we were not expecting him to join Chelsea but the invitation came in December and he was signed in January.

"After the scouting Manchester United too were considering him because they had someone from Tromso playing in the same team with him, his name is Isak Hansen-Aaroen so they said they'll come back for him and we were waiting for summer but Chelsea came in and in a period of two weeks the deal was sealed, and we had to wait for the transfer window to open in January."
He added : "Tromso refused him going to SPAL in Italy mainly because they felt it wasn't a good place for his talent but they were really keen on him, they did everything possible, invited me over there, talked to me, but eventually he didn't go so we decided to leave him to develop for one more season

"He is one of the youngest players to debut in the Norwegian top-flight.
"We were actually waiting for summer 2020 when the call from his agent came in that Chelsea want to have him for ten days screening, so I said why not and he was happy to go.

"I knew he was going to make it so I told him to be himself and not to be too cautious.

"Five days into the screening period, word has already come out that they were happy with him and they will sign him".
Mina Fiabema is delighted with the progress made by his son at Chelsea over the last one year, pointing out that he was initially signed for their U18 team but has broken into the U23 set up in the new season.
"His progress in Chelsea has been very good, he was signed to play for the U18s and he's now playing for the U23s.
"They, youth team coaches, are very happy with him. Tore Andre Flo has commended him for his work rate so far," he concluded.
Fiabema has scored five goals in ten games across all competitions for Chelsea's youth teams this season and started the final of the 2019-20 FA Youth Cup in November 2020.
Ifeanyi Emmanuel
Copyright ANS