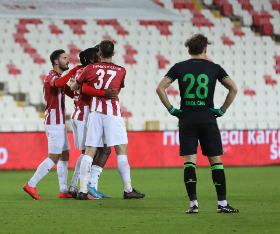 Out-of-favour Super Eagles striker Olarenwaju Kayode scored his first goal in domestic competitions as Sivasppor defeated Giresunspor 1-0 in the Turkish Cup on Thursday.
The Shakhtar Donetsk loanee was in red hot form in the group stage of the Europa League, scoring in four consecutive matches before the last matchday away at Maccabi Tel Aviv.
But he was on a barren run in the Super Lig, playing seven matches in total without finding the net and his only goal involvement was against Kayserispor when he was credited with an assist.
Against Giresunspor this afternoon, Kayode entered the game as a substitute in the 59th minute and ended his goal drought in domestic competitions when he struck in the second minute of stoppage time.
The 27-year-old spent 411 minutes on the pitch in total before opening his account this season.
He finished last season directly involved in 16 goals (10 goals, 6 assists) from 27 appearances in the Turkish top-flight while wearing the colours of Gaziantep FK.
Ifeanyi Emmanuel
Photo Credit : sivasspor.org.tr
Copyright ANS