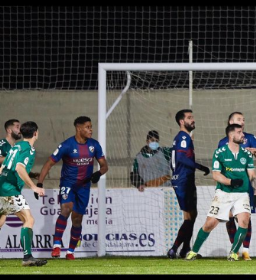 Teenage Nigerian striker Kevin Omoruyi took to social media on Thursday to celebrate making his first team debut for La Liga side SD Huesca.
Prior to Tuesday evening's Copa del Rey first round fixture against Tercera Division side Marchamalo, he was an unused substitute on three occasions for league matches and may have been thinking it would extend to four after manager Michel brought on his third substitute in the 76th minute.
With the game in extra time and SD Huesca leading 3-1, Omoruyi was introduced as a replacement for hat-trick hero
Rafa Mir for his first taste of first team football for the Aragon based outfit in the 113rd minute.
The 19-year-old finally got his reward for being magnificent for the reserve team of SD Huesca.
Writing on Instagram in Spanish and now translated to English, Omoruyi said : "An unforgettable experience. 🔥🔥Happy for the debut with @sdhuesca in an official match ⚔️💪🏽".
Omoruyi has been on the books of SD Huesca since 2016 after he was poached from Peñas Oscenses.
His compatriot Kelechi Nwakali was also involved in the 3-2 win vs Marchamalo, coming off the bench for the start of the second half.
Igho Kingsley
Copyright ANS