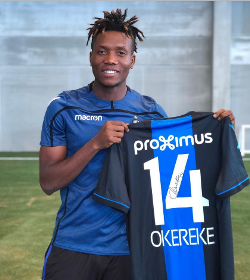 Nigeria U23 international David Okereke was on target as Club Brugge registered a comprehensive 3-0 victory over KV Mechelen at AFAS Stadion on Thursday night.
Manager of the Belgian champions, Philippe Clement made an injury enforced substitution eight minutes before half time, bringing on Okereke as a replacement for Noa Lang.
After a goalless first half, Club Brugge were two goals to the good in the space of five minutes in the second half, courtesy of brace from Krépin Diatta.
A minute to the end of the game, Okereke made the score more emphatic when he blasted the ball into the roof of the net from close range after a through ball from Mats Rits.
It was the first goal the former Spezia star managed to score in an away game for more than a year - his last coming against Zulte Waregem on October 30, 2019.
The 23-year-old has now 50 appearances in all competitions for Club Brugge, including 34 in the Belgian First Division A, 4 in the Beker van Belgie and the remaining games in European competitions.
Super Eagles striker Emmanuel Dennis was expected back in Belgium on Thursday after he was granted compassionate leave to attend the funeral of his late brother and was not involved in the win vs KV Mechelen.
Igho Kingsley
Copyright ANS