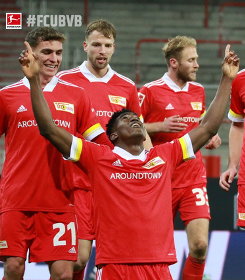 Red-hot Liverpool loanee Taiwo Awoniyi made it four goals in his last six German Bundesliga appearances after getting on the scoresheet for Union Berlin in their 2-1 home win vs Borussia Dortmund at Stadion An der Alten Försterei on Friday.
However, the headline certainly belongs to German-Cameroonian youngster Youssoufa Moukoko who made a piece of history during the game.
Fresh from erasing Celestine Babayaro's long-standing Champions League record, Moukoko added another record to his collection after becoming the youngest-ever player to find the net in the Bundesliga, aged 16 years and 28 days.
Awoniyi came in from the back and finished off a corner kick to make it 1-0 in the 57th minute but the home team's lead lasted three minutes with Moukoko equalising for Borussia Dortmund.
Four minutes from time, the 2013 U17 World Cup winner made way for Gogi, eight minutes after Friedrich netted the winning goal with a stunning header.
Awoniyi's goal tonight was the first he has scored at home since his Bundesliga debut, with his four previous goals against Cologne (2), Hertha BSC and VfB Stuttgart netted in away matches.

Following their fifth win of the season, Union Berlin are fifth with 21 points from 13 games in the provisional standings.
Ifeanyi Emmanuel
Photo Credit : fc-union-berlin.de
Copyright ANS