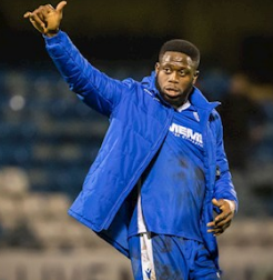 Gillingham have climbed to 12th in the League One standings following their 4-1 hammering of Rochdale AFC at Crown Oil Arena in Greater Manchester on Saturday afternoon.
Nigerian striker John Akinde ended a nine-game goal drought in all competitions in style by notching a brace against the Dale.
Midway through the first half, he chested the ball, turned and beat the goalkeeper to double Gillingham's advantage.
The 31-year-old was one of the most impressive players on the pitch at the end of the first half.
And the experienced attacker stretched Gillingham's lead to 4-0 when he dispatched a penalty he had won in the 47th minute.
In the 63rd minute, Arsenal loanee Tolaji Bola entered the game as a substitute for the home team with the outcome of the game all but decided.
Akinde joined Gillingham in the January transfer window after spells at Bristol City, Portsmouth, Barnet and Lincoln City among others.
Igho Kingsley
Photo Credit : gillinghamfootballclub.com
Copyright ANS