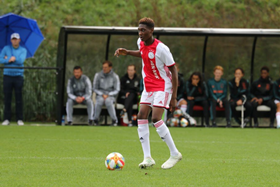 Promising midfielder of Nigerian descent Gibson Yah is inching closer to making his competitive debut for Ajax Amsterdam's reserve team, allnigeriasoccer.com reports.
On Monday, December 21, the former Netherlands U15 international was included in Ajax Amsterdam II's matchday squad for the first time in his career.
Yah was one of the three substitutes not utilised by manager Mitchell van der Gaag in the Keuken Kampioen Divisie (second-tier) clash against Telstar.
Jong Ajax, as they are are alternatively called, were beaten 2-1 by the visitors from Telstar despite opening the scoring in the first half through Ar'jany Martha.
Signed from DVC Buiksloot in 2014, Yah made his debut for Ajax U17s on September 15, 2018 before clocking 15 years and played his first game for the U19s in January 2020.
Being selected for a matchday squad for the U23s at the age of 17 against Telstar shows how highly regarded he is by the Ajax youth team coaches.
Nigeria legends Nwankwo Kanu, Finidi George and Sunday Oliseh played for Ajax Amsterdam's first team in the past and Yah will be hoping to follow in their footsteps in the coming years.
Ifeanyi Emmanuel
Copyright ANS