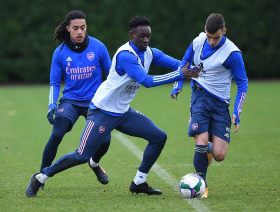 Folarin Balogun has been praised again by Arsenal captain Pierre-Emerick Aubameyang before tonight's Carabao Cup quarterfinal clash against Manchester City at the Emirates Stadium.
The American-born striker of Nigerian descent has been eye-catching in the Europa League, scoring two goals and providing an assist in less than 62 minutes of action.
Balogun actualized his dream of making his professional debut for his boyhood club when manager Mikel Arteta brought him on for the last sixteen minutes of the 3-0 rout of Dundalk on October 29.
Speaking to Arsenal's Matchday Programme, Aubameyang said : "I've spoken about how talented I think Flo Balogun is, so I'm not even surprised to see him scoring in the Europa League as he has been doing.

"I am so happy for him because when you are young, your dream is first of all to play with the first team.

"Once you have done that you want to start scoring, and he has already done that in a Europa League game.
"It's always something special when you get your first goal with a professional team. I'm really happy for him and hopefully he's going to score more goals for the club".
Another young player who has impressed the Gabon striker is Miguel Azeez, who played the last seven minutes on matchday six of the Europa League vs Dundalk.
"We saw a few more young players in our last European game, and we also have them joining in with training quite a lot lately.

"One player who I think looks really good is Miguel Azeez. Miguel is going to be a great player in the future.
"He's really calm and mature so I'm sure he's got what you need to be a success and have a big career," added Aubameyang.
Azeez and Balogun trained with Arsenal's first team on Monday morning with a view to playing their first domestic game against Manchester City later today.
Ifeanyi Emmanuel
Photo Credit : arsenal.com
Copyright ANS