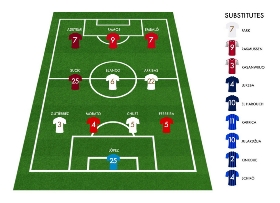 Germany youth international of Nigerian descent Karim Adeyemi has been named in the Team of the Tournament for the 2019-2020 UEFA Youth League, Europe's football governing body UEFA has announced.
In a 4-3-3 formation, the Red Bull Salzburg starlet was deployed on the left side of attack.
Last season, the 18-year-old Adeyemi featured in nine matches in the UEFA Youth League and was directly involved in ten goals (3 goals, 7 assists).
Apart from the win vs Porto in the intermediate stage deciders, he either scored or provided an assist in all the matches he played in the UEFA Youth League.
Meanwhile, Real Madrid winger Marvin Akinlabi's strike against Inter Milan was awarded the best goal of the UEFA Youth League.
Akinlabi, who is also eligible to represent South Korea and Spain national teams, broke the deadlock nineteen minutes into the second half, finishing off a training ground move from a corner.
The 20-year-old was named among the nine substitutes in the Team of the Tournament.
Ifeanyi Emmanuel
Copyright ANS