Club Brugge's Okereke Back To His Best, Scores Third Goal In December After Coming Off Bench 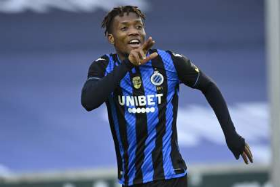 Club Brugge winger David Okereke is pushing to be reinstated into the starting lineup of the Belgian First Division A champions going by his performances in his last five games in the division.
The former Spezia man continued his purple patch by finding the net as Club Brugge thrashed KAS Eupen 3-0 at
Jan-Breydel-Stadion on Saturday afternoon.
In doing so, the former Nigeria U23 international made it three goals in five appearances, with all the goals scored after coming off the bench in matches this month, starting from his winner vs Sint-Truiden on December 5.
A six-minute brace from Noa Lang in the second half saw Club Brugge establish a two-goal lead, before Okereke made it 3-0 in the 82nd minute, two minutes after his introduction.
The winger sent a left-footed shot past goalkeeper Theo Defourny after a brilliant back-heel pass from Lang who was on a hat-trick but opted to make a pass to his good friend.
Emmanuel Dennis was named in Club Brugge's matchday squad but watched proceedings from the bench for the entirety of the game.
In the provisional standings, the Blue-Black are first with 39 points but have played two games more than Racing Genk who are second with 34 points accumulated.
Ifeanyi Emmanuel
Photo Credit : clubbrugge.be
Copyright ANS