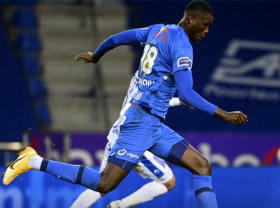 Paul Onuachu continued his fine form in the Belgian First Division A by getting on the scoresheet as Racing Genk were held to a 1-1 draw by Waasland-Beveren at the Luminus Arena on Sunday evening.
In doing so, the lanky striker took his tally for 2020-2021 to fifteen goals in seventeen league appearances, and extended his lead at the top of the goalscoring charts.
In the 24th minute, Onuachu spooned the ball over the goalkeeper and into the net after a brilliant assist from
Bryan Heynen but Aboubakary Koita's goal just before half time meant both sides were level at the interval.
On the hour mark, the Nigeria international had a chance to win it for the home team but saw his header saved by Nordin Jackers.
Onuachu needs eight more goals to match his personal best of 23 goals in a single season set in his final season at Danish club FC Midtjylland.
Ten of his fifteen goals in the current campaign have been scored at the Luminus Arena.
After eighteen matches played, Racing Genk are second in the table with 35 points before their visit to Eupen on January 6, 2021.
Igho Kingsley
Photo Credit : krcgenk.be
Copyright ANS