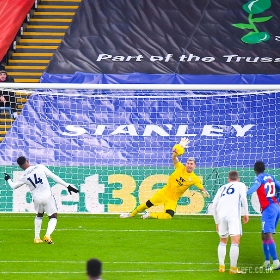 Leicester City coach Brendan Rodgers refused to blame Kelechi Iheanacho for his side not picking up all the three points in their 1-1 draw with Crystal Palace in a Premier League clash on Monday.
The Nigeria international had a chance to put the Foxes 1-0 up in the 18th minute but was denied from the spot by goalkeeper Vicente Guaita.
Wilfried Zaha fired the hosts ahead in the 58th minute before Harvey Barnes restored parity with a shot from the edge of the penalty area seven minutes from time.
Iheanacho is tarnishing his reputation as a penalty taker as he also missed from the spot during the Super Eagles 1-1 draw with Tunisia in October.
Rodgers, as you would expect, has defended his number 14, saying that he had a one hundred percent record in penalty practice before the trip to the capital.
Speaking to Amazon Prime, the Northern Irishman said : "I said at half time, it was one you have to let go of.
"He practised yesterday and hit five out of five, so he was confident, but it is just one of those things."
Iheanacho has not scored in the English top-flight since finding the net in Leicester City's 3-0 rout of Crystal Palace in July 2020.
Igho Kingsley
Photo Credit : cpfc.co.uk
Copyright ANS