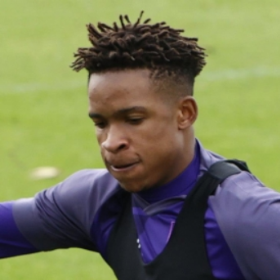 Young Anderlecht winger Paul Mukairu has continued to flourish since moving to the Belgian giants in the summer transfer window.
The 2000-born player has directly participated in five goals (2 goals, 3 assists) from his nine appearances in the Belgian First Division A, including his insurance goal in the 71st minute of the 2-0 win against Beerschot V.A this past weekend.
Mukairu has given credit to former Manchester City captain Vincent Kompany, who now coaches Anderlecht, for his strike against Beerschot, saying he always advises the players to play with intensity.
Speaking to Anderlecht's official YouTube channel, he said : "It was a good game from the team, we worked hard this week to make sure we get this win because it was important for us because they were one point behind this and we needed this win.

"I got the ball. Coach Vincent will always say when you have the ball always go with intensity, I saw the space, it was a little bit tight angle but I just went in and shot with joy.

"I wanted to hug all my teammates but you know the rules and it is for the betterment of everybody, to keep social distancing even in the game, it is good to respect the rules and good for everybody to stay safe."
Mukairu has wasted no time breaking into Kompany's starting lineup despite linking up with the squad late following his transfer from Antalyaspor, having started each of their last seven matches in the division.
Igho Kingsley
Photo Credit : rsca.be
Copyright ANS