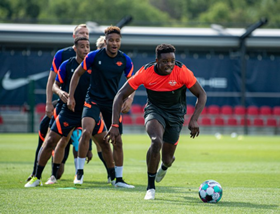 Former Manchester United and Manchester City striker Noah Ohio has been loaned out by RB Leipzig, the German Bundesliga club have informed through their official website.
The Netherlands youth international of Nigerian descent will be spending the next eighteen months at Eredivisie club Vitesse Arnhem.
Ohio joined RB Leipzig in the summer of 2019 and has been impressive for their youth teams, scoring 10 goals in 13 appearances for the U17s and six in five games for the U19s in the U19-Bundesliga Nord/Nordost and DFB-Pokal der Junioren.
His contract with Vitesse Arnhem will start running when he turns eighteen years on January 16.
He played for FC Almere youth team in the Netherlands before making the switch to Manchester United in 2015.
Ohio is eligible to represent Nigeria without requesting a change of association as his appearances for England U16s and Netherlands U16s came in non-binding friendly matches.
Igho Kingsley
Photo Credit : dierotenbullen.com
Copyright ANS
All rights reserved. This material, and other digital content on this website, may not be reproduced, published, rewritten or redistributed in whole or in part without prior express written permission from allnigeriasoccer.com