...the complete Nigerian football portal
Subscribe
'Ours Was Even Worse' - Manu Garba Assures No Cause For Alarm Golden Eaglets Undergoing MRI Day Of Game
Published: January 06, 2021 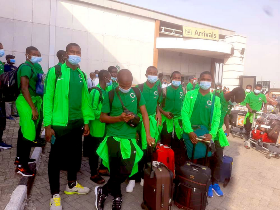 Two-time FIFA U17 World Cup-winning coach,  Manu Garba says Nigeria's U17 national team undergoing MRI test on the day of their match is not a problem.
Regarded as the most successful youth team coach in these parts, Garba wants the Golden Eaglets to forget about conspiracy theories and focus on qualifying for the Africa Cup of Nations.
Manu who also won the maiden edition of the WAFU U17 Championship in 2018 dismissed reports circulating in the media that CAF may be working against Nigeria.
He added that what the Fatai Amoo led Golden Eaglets is going through is not different from what his teams have been subjected to in the past.
"I think ours was even worse than this one because we traveled in batches. I, the head coach, was left behind with some officials and five players," Manu Garba explained.

"The MRI was about to be done when we were about leaving Nigeria, it was done in batches like this one.
"They took some players the first day and the following day on the day of our match others underwent the MRI, so it is not a problem."
Five-time world champions Nigeria will take on the Baby Elephants of Ivory Coast in their West B Zone qualifiers opener at the Stade de Kégué on Wednesday afternoon.
Garba has advised the Golden Eaglets class of 2021 and the officials on what to do in their present predicament.
"The officials should sit down with the players and tell them whatever CAF does, whatever the opponents do, they should not react negatively.
"All they need is let them pray for the players to pass the MRI and focus on the game itself.

"The most important thing is the pitch, in football whatever the opponents and officials do if you try to react you'll be at the losing end.

"They should psyche the players so that they focus on what they are there to do," he concluded.
Ifeanyi Emmanuel
Copyright ANS