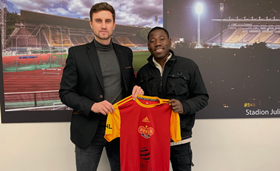 Nigeria U23 international Sunday Faleye has completed a move to Czech National Football League club FK Dukla Prague.
The 22-year-old striker has put pen to paper on a three-and-a-half-year deal with FK Dukla Prague, keeping him at the club until the end of the 2023-2024 season.
A product of Shooting Stars, FK Dukla Prague are his third European club following spells at SCR Altach II and  Wacker Innsbruck.
Speaking after signing the contract, Faleye told Dukla Prague's official website : "I am excited to have become a part of Dukla. I will try to do my best on the field and help the team to get as many points as possible".
Faleye was a member of the Dream Team VII squad to the 2019 U23 Africa Cup of Nations, coming off the bench in the three group matches played by the national team, and helped Nigeria reach the final of the 2018 African Nations Championship.
The striker is credited with 34 appearances for his previous club FC Wacker Innsbruck and scored four goals.
Igho Kingsley
Photo Credit : fkdukla.cz
Copyright ANS