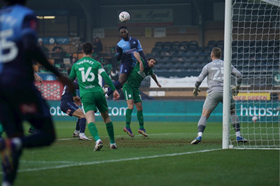 Allnigeriasoccer.com's round up of the Nigeria-eligible players who found the net for their respective clubs in the third round of the Emirates FA Cup on Saturday, January 9.
Wycombe Wanderers are through to the fourth round after an excellent 4-1 win against fellow Championship side Preston North End at Adams Park.
As many as four players of Nigerian descent were in action for the Chairboys; Uche Ikpeazu and Fred Onyedinma started in attack while Everton loanee Dennis Adeniran and Adebayo Akinfenwa entered the game as substitutes in the 66th and 76th minute respectively.
The home team took an early lead in the third minute thanks to Onyedinma who headed home after an inviting cross from a teammate, before Joe Jacobson converted a penalty won by Ikpeazu six minutes later.
At Bloomfield Road, West Brom lost 3-2 on penalties to third-tier side Blackpool.
Jerry Yates gave the home team the lead in the 40th minute but Ajayi restored parity when he rose highest to head a Grosicki cross into the bottom corner in the 52nd minute - his first goal in the FA Cup proper.
The game had to be settled by penalties as both teams were deadlocked at 2-2 at the end of extra-time.
Ifeanyi Emmanuel
Photo Credit : wycombewanderers.co.uk
Copyright ANS