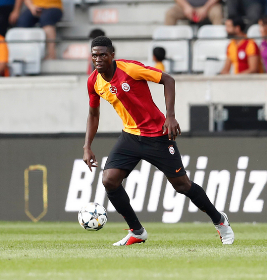 Former Nigeria U20 international Valentine Ozornwafor finally made his competitive debut for Turkish Super Lig giants Galatasaray on Saturday, January 9.
Signed from Enyimba of Aba on June 28, 2019, the central defender's maiden appearance for the Lions came 561 days after he officially joined the club.
Wearing the number 49 at the back of his jersey, Ozornwafor was brought on in the 82nd minute as a replacement for Ryan Donk as Galatasaray registered a comprehensive 6-0 win against Genclerbirligi Ankara at the Ali Sami Yen Spor Kompleksi Türk Telekom Stadyumu.
The 21-year-old was not eligible to be fielded in the first half of the season but was issued a license before the game against Genclerbirligi.
He spent the entirety of last season on loan at Spanish side Almeria, where he struggled for game time, playing just five games in all competitions over the course of 2019-2020.
Goals from Mbaye Diagne, Younès Belhanda (3), Ogulcan Caglayan and Ryan Babel earned Gala their tenth league win of the season.
Stoke City loanee Oghenekaro Etebo was not in the matchday squad and Jesse Sekidika was on show for the last fourteen minutes.
Ifeanyi Emmanuel
Photo Credit : galatasaray.org
Copyright ANS