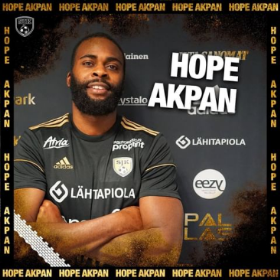 Liverpool-born Nigeria international midfielder Hope Akpan has ended his search for a new club after sealing a move to Finnish Veikkausliiga club Seinäjoen Jalkapallokerho.
The Everton Academy product was unemployed for around six months after his release by Bradford City at the end of the 2019-2020 campaign.
Akpan's contract with SJK Seinäjoki will see him remain at the top-flight club until the end of the 2021 season.
Commenting on his transfer to SJK, the Super Eagle star said to the club's official website : "We started discussions already in the autumn, when the season was coming to an end in Finland.
"We still had a season in full swing in England at the time and I played there every week. But I felt that this is a new and interesting challenge for me and my family; move to a whole new country and play in a new series.
"It gives me a whole new kind of energy and enthusiasm".

Akpan added : "I want to play good football on the main league team, and with SJK this will happen.
"I've also talked a lot with the club's head coach objectives, as well as the mode of playing, and I believe that this is the right step in my career.
"Here we have the opportunity to win something together and perhaps get to play in Europe. I'm really happy and excited about this transfer".
The 29-year-old Akpan lists Hull City, Crawley Town, Reading, Blackburn Rovers and Burton Albion among his previous clubs.
Ifeanyi Emmanuel
Photo Credit : sjk.fi
Copyright ANS