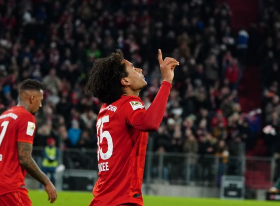 Eintracht Frankfurt manager Adi Hütter has confirmed that they are interested in signing Netherlands U21 international of Nigerian descent Joshua Zirkzee in the January transfer window.
However, Zirkzee's proposed move to Eintracht Frankfurt has become complicated following his sending off in the 27th minute of Bayern Munich II's 2-0 loss to 1860 Munich in the 3. Liga last weekend.
The Dutch-Nigerian has been suspended for three matches by the German Football Association and this could throw a spanner in the works as Eintracht Frankfurt are in the market for a striker that would go straight into the starting lineup.
When quizzed about Zirkzee's suspension at Monday's press conference, Hutter explained to reporters : "It is at least one criterion that you have to think about. However, it does not make sense to discuss unlaid eggs".
The 50-year-old added : "We are interested in him. But on the one hand there is Eintracht Frankfurt, on the other hand Joshua Zirkzee and his advisor as well as FC Bayern.
"As long as not all parties agree and communicate this with each other, it could take longer".
Zirkzee is seeking to move on to pastures new due to his lack of first team opportunities at Bayern Munich, having made four appearances as a substitute and one start in the current season and logging 102 minutes.
Igho Kingsley
Photo Credit : fcbayern.com
Copyright ANS