...the complete Nigerian football portal
Subscribe
Arsenal Star Mesut Ozil Reveals He Wrote 'Okocha I0' On The Back Of His Fenerbahce Shirt
Published: January 11, 2021 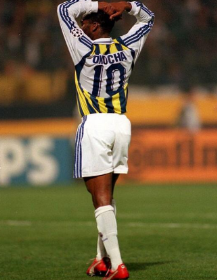 In a question and answer session on twitter, Arsenal playmaker Mesut Ozil revealed his admiration for Super Eagles legend Austin Okocha, saying he had a replica of the midfielder's Fenerbahce jersey as a kid.
The 2014 World Cup winner has hinted that a move to the Yellow Canaries could be on the cards in the January transfer window, and he has also been linked with a transfer to Major League Soccer.
Asked what name and number he wrote behind the Fenerbahce shirt he wore when he was younger, Ozil replied : "Number 10 and Jay Jay Okocha".
Okocha played for Fenerbahce for two years, between 1996 and 1998, after joining the Istanbul club from Eintracht Frankfurt.
He enjoyed success at Fenerbahce, helping the club win the Prime Minister's Cup in 1998 and made six appearances for the Istanbul club in the UEFA Champions League.
Blessed with outrageous skills and immense ball control, the 1994 Africa Cup of Nations winner was the most expensive player sold by a Turkish club when he joined PSG in the summer of 1998 after starring at the World Cup hosted by France.
Okocha scored an impressive 30 goals and set up sixteen others in 62 games in the Turkish top-flight while at Fenerbahce.
Ifeanyi Emmanuel
Photo Credit : cnnturk.com
Copyright ANS