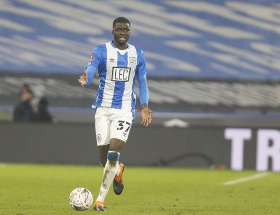 2002-born central defender of Nigerian descent Mustapha Olagunju made his professional debut for Championship outfit Huddersfield Town after he was named in the starting lineup as they suffered a 3-2 defeat at the hands of Plymouth Argyle last Saturday.
The promising teenager was considered for the starting XI with manager Carlos Corberán resting some key players.
Prior to last weekend's fixture at the John Smith's Stadium, Olagunju had been included in three matchday squads - two in the Championship and the other in the Carabao Cup - but stayed on the bench.
He was walking a disciplinary tightrope following his booking as early as the fifth minute and with the Terriers in search of an equaliser, he had to be replaced in the 77th minute.
Three years after joining Huddersfield Town from Kent Football United, the XYZ Academy product was delighted to make his professional debut.
Writing on Instagram, Olagunju said : " Disappointing result last night but delighted and extremely proud to have made my professional debut for @htafc . ⁣
⁣
"Massive thanks to everyone who has helped me get to this moment. Hopefully many more to come. 🙏🏾❤️".
Igho Kingsley
Copyright ANS