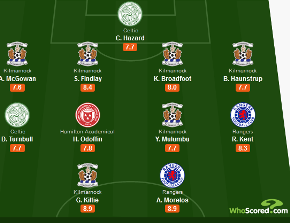 Versatile Nigerian right-back Hakeem Odoffin has been named to the Scottish Premiership Team of the Week by football statistics website whoscored.com.
The 22-year-old earned a place on the Best XI after catching the eye for Hamilton Academical in a 2-0 loss to Kilmarnock, a game he was deployed as a defensive midfielder.
Over this campaign, Odoffin has been one of the standout players in the Scottish Premiership with three goals in 21 appearances.
He won an incredible 11 aerial duels vs Kilmarnock - a joint game high figure - and made three interceptions while notching two tackles and three clearances.
The Barnet-born Odoffin completed one take-on, won two fouls for his team and attempted one shot which went off target.
He learnt his footballing trade at Tottenham Hotspur and spent time with the academy teams of Reading and Barnet, before stints at Wolverhampton Wanderers, Northampton Town and Livingston.
Ifeanyi Emmanuel
Copyright ANS