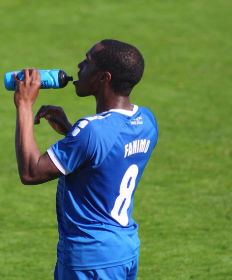 Super Lig sides Kayserispor, BB Erzurumspor and MKE Ankaragucu have approached Bosnian top-flight club FK Sarajevo over the signing of the 26-year-old.
The stumbling block to a deal is that the three Turkish clubs all want to loan Fanimo for the remainder of the 2020-2021 season with an option to buy inserted into any deal while Sarajevo will only consider an outright sale this month.
It is out of the winger's hands now and it is left for the interested clubs and Bosnian champions to come to an agreement.
With a goal involvement of nine in 23 appearances across all competitions, Fanimo has taken Bosnian football by storm since his arrival at the capital club from Mladost Doboj Kakanj in the summer of 2020, leading to teams battling for his signature.
He has represented England at U16, U17 and U18 levels but remains eligible to don the Super Eagles jersey.
Ifeanyi Emmanuel
Copyright ANS