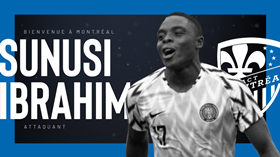 Montreal Impact have pulled off a transfer coup by signing Sunusi Ibrahim from Nigerian club 36 Lion, the Major League Soccer club announced on Tuesday through their official webpage.
Ibrahim was heavily linked with a switch to Watford having trained with the English Championship club last summer but a deal did not materialize due to a change of coaches.
The 2002-born center forward was recommended to the Vicarage Stadium outfit by English-based Nigerian agent Ladi Salami, who used to look after the affairs of Hornets striker Isaac Success and brokered the deal that took Tom Dele-Bashiru to Watford in 2019.
Ibrahim has put pen to paper on a three-year contract with Montreal Impact, with the club holding the option for an additional year.
"The Club is very happy to have completed the transfer of this young player, who is already part of his country’s U23 squad despite his young age," said sporting director Olivier Renard.
"It’s a great addition to the squad, especially considering several European clubs were very interested in him as well.
"Sunusi Ibrahim is a fast and powerful striker who can also play on the wings."
Ibrahim's deal with Montreal Impact is subject to receipt of his international transfer certificate and medical examination.
Ifeanyi Emmanuel
Copyright ANS