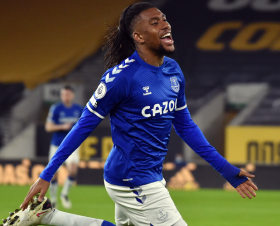 Everton have climbed to fourth position in the English Premier League table after beating Wolverhampton Wanderers 2-1 at the Molineux Stadium on Tuesday night.
Toffees boss Carlo Ancelotti had to tinker with his formation with his top scorer Dominic Calvert-Lewin unavailable for selection due to a hamstring issue, deploying a 3-5-2 system with Alex Iwobi slotting in at right wing-back.
Iwobi capped off a great performance with his first goal of the season, giving Everton a perfect start when he coolly finished Lucas Digne's pass into the bottom corner in the sixth minute.
The Nigeria international's strike was cancelled out by Wolves' Rúben Neves on 14 minutes but the visitors clinched three points thanks to Michael Keane, who rose above everybody and drove a header into the far corner in the 77th minute.
Speaking post-match, Ancelotti was thrilled with the way Iwobi and Digne combined for the first goal as it was his game plan to utilize the flanks.
"We had a different approach without Richarlison and Calvert-Lewin. We played more to attack the flanks with Iwobi and Digne and it worked well because the first goal was a fantastic combination," Ancelotti said to BBC Sport.

"Michael Keane is unbelievable with his head. His goal helped us to stay in a good position in the table."
Iwobi had gone 37 matches in the Premier League without getting on the scoresheet before scoring his second career goal against Wolverhampton Wanderers.
Ifeanyi Emmanuel
Photo Credit : evertonfc.com
Copyright ANS