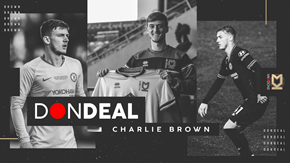 EFL League One club Milton Keynes Dons have completed the signing of Charlie Brown on a permanent basis.
The left-footed attacking player has joined the Dons after spending the last four and a half years at Chelsea.
Signed from Ipswich Town in the summer of 2016, Brown made appearances for Chelsea in the U18 Premier League, Premier League 2, UEFA Youth League, EFL Trophy and FA Youth Cup, scoring 58 goals.
Commenting on his transfer to MK Dons, Brown told the official website of MK Dons : "I’m over the moon to be here. This is an opportunity I’ve been waiting for and I can’t wait to get on the pitch and show the fans what I can do.

"The Gaffer has got a really strong plan for the team and I’m really excited to be a part of that and have the opportunity to help the Club get to where it wants to be.

"I’ve seen the way the team plays, with a lot of possession and creating a lot of chances for the strikers. It’s going to be up to me to finish those chances off and I’ll be looking to do that as often as I can!"
The 21-year-old Brown links up with Nigerian midfielder David Kasumu at Stadium MK.
Igho Kingsley
Photo Credit : mkdons.com