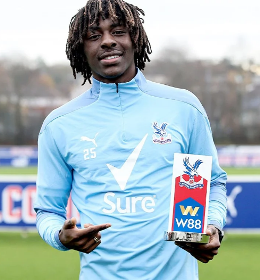 Crystal Palace coach Roy Hodgson has insisted that Eberechi Eze doesn't deserve to be dropped from the matchday squad against Arsenal as punishment for breaching coronavirus protocols.
The England U21 international of Nigerian descent was at the Kiyan Prince Foundation Stadium for the FA Cup meeting between his former club Queens Park Rangers and Fulham last weekend.
Eze was spotted in the directors' box not wearing a mask and was also not social distancing from other players in the stands.
Hodgson revealed that the Anglo-Nigerian attacking midfielder was naive in watching Queens Park Rangers and indicated that he would be disciplined by the club.
Quizzed on a suitable punishment for Eze, Hodgson told reporters at Wednesday afternoon's press conference: "It would have to be on an individual basis - does what Eze did deserve leaving him out? I don't think so.

"But it does merit a fine. We take this very seriously. We don't want our players breaching coronavirus regulations.

"I think he did it naively and foolishly, not a determined gesture to break a rule but he did. We're not happy at all and we show that by fining him.

"I'm not a big fan of that over the years, but on this occasion, I think this error of judgement deserves it and he has to be cautious not to make them again."
Eze has started eight of the last ten matches played by the Eagles in the Premier League and has directly participated in four goals (2 goals, 2 assists).
Igho Kingsley
Photo Credit : cpfc.co.uk