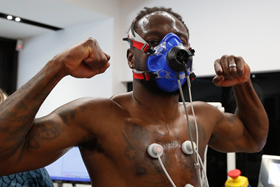 Victor Moses has been named in Spartak Moscow's squad for their mid-season training camp holding in the United Arab Emirates, the Russian Premier League club confirmed via social media on Wednesday evening.
The Chelsea loanee and twenty-eight other players have been selected for the trip by manager Domenico Tedesco.
Moses was among the players who underwent an in-depth medical examination at the Luzhniki clinic ahead of the trip to the United Arab Emirates.
Spartak Moscow will hold two winter training camps in Dubai, the first from 14 to 24 January and the second from 28 January to 8 February.
Moses joined the Muscovites on loan for the remainder of the 2020-2021 season last October and the capital team have an option to buy him from Chelsea for a fee of five million euros.
The 2013 Africa Cup of Nations winner has appeared in nine matches in the Russian top-flight, scoring one goal on his full debut against Krasnodar.
Spartak Moscow's first game after the winter break comes up against Dinamo Moscow on February 20, 2021.
Ifeanyi Emmanuel
Photo Credit : spartak.com
Copyright ANS