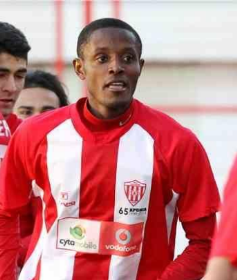 FK Cukaricki have confirmed that Nigerian winger Eze Vincent has ended his association with the club by signing a deal with Belarusian Premier League club FC Shakhtyor Soligorsk.
The 27-year-old is in contention to make his debut in the qualifying rounds of next season's UEFA Champions League by virtue of FC Shakhtyor Soligorsk winning the 2020 Belarusian Premier League.
A product of Collins Edwin Sports Club, he began his career in Europe with çaykur Rizespor but didn't get to make his official debut for the Turkish club before his departure in 2014.
His other clubs include Apollon Limassol, Nea Salamina, Omonia, CA Bizertin, Metalac Gornji Milanovac and Vojvodina.
Eze had a fine start to the 2020-2021 campaign, scoring three goals in his first four matches for FK Cukaricki in the Serbian Superliga.
In preparation for the new season, FC Shakhtyor Soligorsk have lined up friendlies against Isloch, Dynamo Kiev, Zenit St. Petersburg, Krasnodar, Riga and Spartak Moscow.
Ifeanyi Emmanuel
Copyright ANS