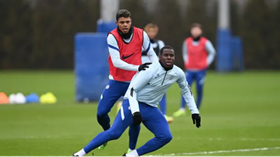 Chelsea boss Frank Lampard continues to run the rule over Nigeria-eligible youngster Faustino Anjorin with a view to handing him his debut in the Premier League for the 2020-2021 season.
The Blues have published training images of Wednesday's workout at Cobham and confirmed that Anjorin was involved in the session.
The versatile winger will be hoping to be involved in some capacity when Chelsea take on Fulham in a west London derby at Craven Cottage on Saturday, January 16.
His only squad involvement for a Premier League fixture was against Everton on December 12 but he remained rooted to the bench.
Anjorin has featured prominently for Chelsea in the Premier League 2 since recovering from an injury that had kept him on the sidelines for the first few weeks of the campaign, scoring three goals and setting up two others.
The 19-year-old made his Premier League debut against Everton last term and has also played for the Stamford Bridge outfit in the Champions League, Carabao Cup and FA Cup.
Igho Kingsley
Photo Credit : chelseafc.com
Copyright ANS