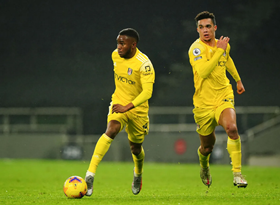 An impressive Fulham side held Tottenham Hotspur to a 1-1 draw in the Premier League on Wednesday night, with four players of Nigerian descent on parade at the Tottenham Hotspur Stadium.
Harry Kane gave Spurs a first half lead, only for the Cottagers to equalise through Ivan Cavaleiro after he was set up by Ademola Lookman in the 74th minute.
Cavaleiro headed home a beautiful cross from Lookman after the RB Leipzig loanee beat Davinson Sanchez to the line, seven minutes after the Anglo-Nigerian came off the bench.
The Portuguese striker highlighted the role played by the 2017 U20 World Cup winner in the build-up to Fulham's equaliser.
Speaking to BBC Sport shortly after the game, Cavaleiro stated : "After the COVID-19 problems he came on and showed his quality. He helped the team with the assist and boosted his chances with us.
Despite spending only 23 minutes on the pitch, Lookman had a team-high three key passes.
Ifeanyi Emmanuel
Photo Credit : fulhamfc.com