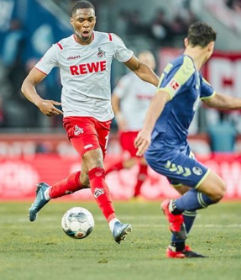 Speaking at a press conference on Thursday afternoon, Cologne sporting director Horst Heldt addressed rumours linking Kingsley Ehizibue with an imminent switch to Italian Serie A club Fiorentina.
The Munich-born wing-back was a hit in his first season at Cologne, leading to a maiden call-up to the Super Eagles squad for their Africa Cup of Nations qualifiers against Sierra Leone which was later postponed.
In the current season, Ehizibue has found himself out of favour at the Billy Goats, making four starts from a possible seventeen in all competitions and as a result has been linked with a departure from the club he joined in the summer of 2019.
"I also read the articles about Kingsley Ehizibue. There is no contact with other clubs, however," Heldt told reporters.
Ehizibue has not played much this season because of concerns about his fitness but the former Netherlands U21 international is making progress and almost in tip-top condition.
Manager Gisdol said : "Kingsley Ehizibue was in a bit of a hole but he is trained well and is on the way back again. It's good to see".
Ehizibue is under contract with Cologne until the end of the 2022-2023 season.
Ifeanyi Emmanuel
Photo Credit : instagram.com/kingsleyehiz
Copyright ANS
All rights reserved. This material, and other digital content on this website, may not be reproduced, published, rewritten or redistributed in whole or in part without prior express written permission from allnigeriasoccer.com