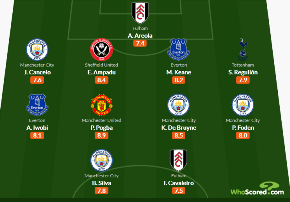 Super Eagles star Alex Iwobi has been named in the latest English Premier League Team Of The Week by Whoscored.com.
The former Arsenal winger helped Everton register an impressive 2-1 road win against Wolverhampton Wanderers on Tuesday, opening the scoring in the sixth minute at the Molineux Stadium - his first goal in the top-flight since September 2019.
Manchester City have contributed the most players to the weekly best XI with four namely João Cancelo, Kevin De Bruyne, Phil Foden and Bernardo Silva; Everton have two in the shape of Iwobi and Michael Keane, while Alphonse Areola and Ivan Cavaleiro are Fulham's representatives.
Tottenham Hotspur's Sergio Reguilón, Sheffield United's Ethan Ampadu and Manchester United's Paul Pogba complete the ceremonial eleven.
Against Wolves, Iwobi played a team-high three shots, two of which were on target, completed a joint team-high three take-ons and won one foul.
The Hale End Academy product was the stat leader in the tackling category with four, made one clearance, committed one foul and was accurate in 87.8 percent of his passes.
Rated at 8.1, Iwobi occupied the right side of a four-man midfield; Pogba, Kevin De Bruyne, Phil Foden were the other midfielders picked.
Ifeanyi Emmanuel
Copyright ANS
All rights reserved. This material, and other digital content on this website, may not be reproduced, published, rewritten or redistributed in whole or in part without prior express written permission from allnigeriasoccer.com