...the complete Nigerian football portal
Subscribe
'At Chelsea It Was Really Good' - Fulham's Aina Has Fond Memories Of His Time At Stamford Bridge
Published: January 15, 2021 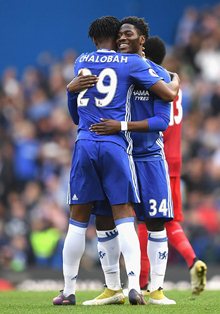 In their last Premier League outing, Fulham put up a solid performance against Tottenham Hotspur, holding the north London club to a 1-1 draw despite the late schedule change.
On a personal level, Super Eagles defender Ola Aina impressed for the Cottagers and was praised by the commentators during the game.
The Torino loanee is a key member of the Fulham defence that has conceded three goals, two from penalties, in their last six matches across all competitions - none of which they lost.
Scott Parker's team next face Chelsea at Craven Cottage, a game Aina is looking forward to due to his connection with The Blues.
The Nigeria national teamer spent twelve years at Chelsea before sealing a permanent move to Torino in the summer of 2019.
Speaking to Fulham's official website, Aina said : "I will always have fond memories of Chelsea, going through the academy, managed to be in a few first team squads, managed to play a few games for the first team.

"At Chelsea it was really good, enjoyed there, made some lifelong friends there both players and coaches."
One of Aina's good friends, Ruben Loftus-Cheek is unfortunately ineligible to face his parent club but Aina is available for selection and he's admitted that being a London derby, it has added extra spice to the game.
The Fulham number 34 added : "Of course, London derbies are always something to relish and for me it just added that little spice to it just because it's my old club and I've got a lot of friends there.
"It will be a good challenge to be up against my old club and my old teammates. To see how far I've come since leaving Chelsea, it will be good to get a good game. "
Aina totaled six appearances for Chelsea, including three in the Premier League, before leaving the club.
Ifeanyi Emmanuel
Photo Credit : chelseafc.com
Copyright ANS
All rights reserved. This material, and other digital content on this website, may not be reproduced, published, rewritten or redistributed in whole or in part without prior express written permission from allnigeriasoccer.com