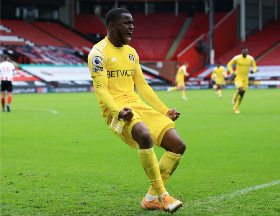 RB Leipzig have reportedly named their asking price for Nigerian winger Ademola Lookman.
The Sun UK says Fulham have been quoted fifteen million pounds for the 2017 U20 World Cup winner who was loaned out to the Cottagers in the summer transfer window.
Lookman has been in excellent form since returning to the Premier League, scoring two goals and providing three assists in fourteen matches.
Fulham are open to signing the winger on a permanent deal but the proposed deal will depend on whether they retain their top-flight status at the end of the 2020-2021 campaign.
Lookman has three-and-a-half years left on his contract with RB Leipzig whom he joined from Everton in 2019.
The former Charlton Athletic man lasted the distance as Fulham were beaten 1-0 by Chelsea in a west London derby on Saturday evening.