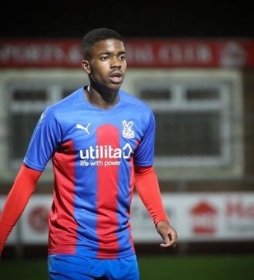 Crystal Palace have overtaken Fulham in the U18 Premier League table following their 4-1 win against the Cottagers in south London on Saturday afternoon.
Three teenagers of Nigerian descent tasted action with left-back Tayo Adaramola and striker Victor Akinwale starting for the Eagles and Fulham's Michael Olakigbe entering the game as a substitute in the 56th minute.
Republic of U17 international Adaramola was the star of the show, scoring and forcing an own goal in the comprehensive home win.
Two minutes before half time, Palace took the lead as Thorsteinn Antonsson accidentally misdirected a cross from Adaramola into his own net, before the Irish-Nigerian doubled the advantage when he curled an effort into the top corner seven minutes after the restart.
It was his first official goal for the U18 team of the Eagles after eleven appearances - all of which he started.
In the 55th minute, Akinwale fired home from close range to make it 3-0, his fourth of the season.
Akinwale and Adaramola inked scholarship deals with Crystal Palace before the start of the 2020-2021 season but the defender's deal was upgraded to a professional contract two months ago.
Ifeanyi Emmanuel
Photo Credit : cpfc.co.uk
Copyright ANS