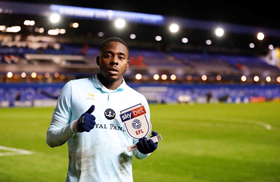 Turkish Super Lig giants Fenerbahce are reportedly in talks with Queens Park Rangers over the signing of Nigerian-born winger Bright Osayi-Samuel this month, meaning the Championship outfit would be due a transfer fee if the transfer materializes.
Football Insider claims that QPR's director of football Les Ferdinand is in negotiations with his Fenerbahce counterpart Emre about selling Osayi-Samuel for 750,000 pounds.
The Yellow Canaries announced on Friday that a four-year agreement has been reached with the Nigerian, starting from the 2021-2022 season.
It remains to be seen if Queens Park Rangers will agree to part company with their Nigerian jewel before the close of the January transfer window as he is one of the first names on manager Mark Warburton's team sheet.
Of the 25 games contested by the London club in all competitions this season, Osayi-Samuel has been named in the starting lineup on 22 occasions and was substituted in once.
The 23-year-old joined Queens Park Rangers from Blackpool in September 2017.
Igho Kingsley
Copyright ANS