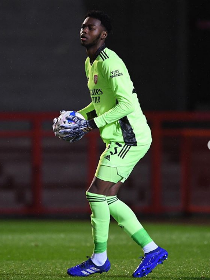 Spanish football tactician Mikel Arteta promoted four teenagers of Nigerian descent to first team training in Arsenal's penultimate workout before their Premier League clash against Newcastle United, allnigeriasoccer.com reports.
Striker Folarin Balogun, goalkeeper Arthur Okonkwo, fullback Ryan Alebiosu and central midfielder Miguel Azeez were all involved in the workout at London Colney on Saturday.
It is believed that Okonkwo has the best chance of making the matchday squad as he has risen up the pecking order of goalkeepers at Arsenal following the permanent transfer of Matt Macey to Scottish Premiership club Hibernian in the January transfer window.
The 19-year-old was the third choice goalkeeper for the FA Cup third round clash against the Magpies last weekend.
Balogun's uncertain future at Arsenal is well documented and it has been suggested that he is set to depart the club at the end of the season.
The 18-year-old Azeez has totaled 13 appearances for the Arsenal teams this term, including a professional debut against Dundalk in the Europa League last month.
Alebiosu, 19, has featured in the Premier League 2 and EFL Trophy this season.
Ifeanyi Emmanuel
Copyright ANS