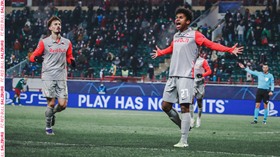 Munich-born striker of Nigerian descent Karim Adeyemi has explained his thinking behind choosing Red Bull Salzburg in the summer of 2018 amid an offer from Premier League giants Chelsea.
The Germany youth international has since gone on to make his debuts in the UEFA Champions League, Europa League, Austrian Bundesliga and OFB Cup since joining Red Bull Salzburg, racking up 25 appearances in total at the age of eighteen.
Chelsea invited Adeyemi and his family to their Cobham Training Center while the likes of Liverpool and Atletico Madrid had been keeping tabs on the player with a view to a transfer only for him to turn down the move to Stamford Bridge because of fear of missing out on first team opportunities.
"First of all, it is important to me that I play regularly. My focus is currently on the Austrian league. I am very happy that I have so much time here. I am fully focused on the task in Salzburg," Adeyemi told Sport 1.
Adeyemi is on the radar of the likes of Barcelona, Chelsea and Bayern Munich following his first team breakthrough and he has admitted that his Nigerian father and Romanian mother are assisting him remain focused and not get carried away.
"It's not that difficult to stay on the ground. I haven't achieved anything yet, even though I'm now playing in the first division in Austria.
"But I find it - in quotation marks - quite normal that I do not answer. My parents and family support me a lot in this.
"My old Unterhaching club taught me that too. But even at Salzburg we players are kept on the ground.
"There is also no reason why I should rise above other people. All people are equal," he added.
Adeyemi was involved in 27 goals (15 goals, 12 assists) for feeder club FC Liefering before he was promoted to Red Bull Salzburg's first team last season.
Igho Kingsley
Photo Credit : redbullsalzburg.at
Copyright ANS