...the complete Nigerian football portal
Subscribe
'This Is What He Signed For Palace For' - Ex-Spurs Star Backs Eze To Shine Vs Man City
Published: January 17, 2021 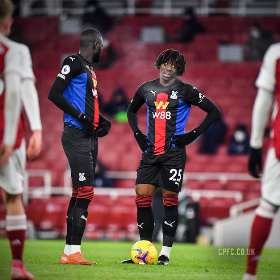 Crystal Palace manager Roy Hodgson won't be able to count on the services of his standout player Wilfried Zaha for the ongoing game against Manchester City as the Ivory Coast international picked up an injury against Arsenal.
Without a player of Zaha's quality in the Eagles side, former Tottenham Hotspur midfielder Michael Brown believes it is an opportunity for Eberechi Eze to step up his game.
The England U21 international of Nigerian descent starts on the right of a five-man midfield also featuring James McCarthy, James McArthur, Andros Townsend and Luka Milivojevic.
Eze is already proving to be an exciting signing for Crystal Palace and is making his seventeenth appearance in the top-flight against Manchester City.
"It's a really fascinating start. Eberechi Eze needs to step up I believe he'll get a bit of space," Brown said on BBC Radio 5 Live.
"This is what he signed for Crystal Palace for, he's got to shine."
Eze was involved in four goals in his last ten Premier League matches before Crystal Palace visited the Etihad Stadium.
Igho Kingsley
Photo Credit : cpfc.co.uk
Copyright ANS