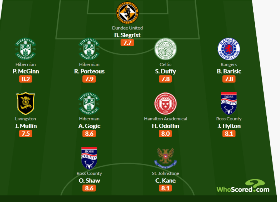 Hamilton Academical central midfielder Hakeem Odoffin has been named in the Scottish Premiership Team Of The Week by football statistics website Whoscored.com.
The Tottenham Hotspur academy product was the shining star as The Accies were held to a goalless draw by Dundee United at the Fountain of Youth Stadium on Saturday, January 16, helping his team keep their third clean sheet in the last four matches in the division.
With a rating of 8.0, Odoffin was named as one of the two central midfielders in a 4-4-2 formation.
The 22-year-old finished the match with a game-high three shots with one on target, and once again showcased his aerial ability by winning five aerial duels.
Odoffin racked up a team-high eight clearances and made a game-high six interceptions while committing four fouls.
He completed 65.6 percent of his passes, made three tackles and won one foul for his team.
Overall, the versatile midfielder has appeared in 22 league matches over the course of the campaign, scoring three goals and was yellow carded on seven occasions.
Igho Kingsley
Copyright ANS