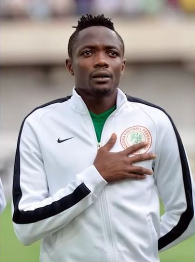 The future of free agent Ahmed Musa will be decided in the coming days with the Nigeria captain and his camp in talks with two Premier League clubs, CSKA Moscow and Turkish teams.
Allnigeriasoccer.com understands that West Brom have reignited their interest in Musa and are mulling over a late swoop for the former Leicester City player.
The Baggies were on the brink of signing the pacy striker on loan in the summer transfer window, only for Al-Nassr to pull out of negotiations at the last minute.
Discussions between Musa's representatives and West Brom are only in the early stages.
Burnley are the other English Premier League team to have made contact to discuss a potential deal but again talks just started.
Musa could be returning for a third stint with CSKA Moscow as he has a contract offer from the Army Men on the table, while two big Turkish teams have expressed an interest in his services.
The 28-year-old has reiterated that his priority is to move to the English Premier League, putting West Brom and Burnley in pole position for his signature if an agreement can be reached.
Ifeanyi Emmanuel
Copyright ANS