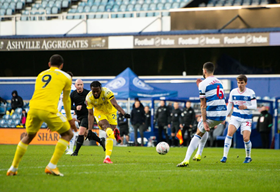 Fulham have been knocked out of the Emirates FA Cup, losing 3-0 to Burnley at Craven Cottage on Sunday evening.
Manager Scott Parker made as many as eight changes from the narrow loss to Manchester United, with central defender Tosin Adarabioyo the only Nigeria-eligible player that retained his place.
Fit-again midfielder Josh Onomah returned to the starting lineup and gave a good account of himself despite the loss, Sylvester Jasper was left out of the squad despite training with the first team last week, Ola Aina was rested and Ademola Lookman was a non-playing substitute.
Jay Rodriguez gave Burnley the lead on the half-hour mark, then made it 2-0 from the penalty spot in the 71st minute, before Kevin Long scored a third goal for the visitors nine minutes from time.
Despite the loss, coach Parker singled out Onomah for praise, noting that the midfielder recently recovered from injury.
Asked if anyone impressed him in the loss to the Clarets, Parker said at the post-match press conference : "I thought Josh Onomah played well today, after being out for so long he came in for QPR.
"Overall I don't think there's anyone who jumped out of the page for us today".
Up next for Fulham, they face Brighton & Hove in the Premier League before another away trip to fellow strugglers West Brom.
Igho Kingsley
Photo Credit : fulhamfc.com
Copyright ANS